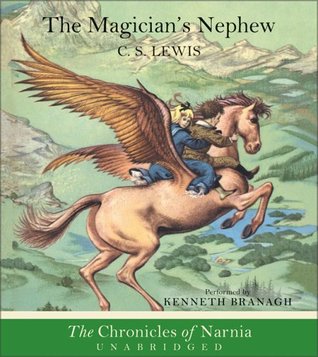 The Magician’s Nephew (The Chronicles of Narnia #6)
by C.S. Lewis
narrated by Kenneth Branagh

I have loved this series as long as I can remember. Narnia has always been a place I wanted to get away to, an escape from every day life into a magic world where anything seemed possible. It doesn’t have the same magic now that it did when I read it as a young girl, of course, but it still holds a special place in my heart and memories.

However, I discovered this time around (2019 re-read) that this book really should not be read first. I have always preferred the publication order for the Narnia books (placing this one sixth), so I never tried reading The Magician’s Nephew first. This time, I joined a readathon going in chronological order, and I was surprised to be disappointed in this book. But why was I disappointed when I love the book and the series? Well, because part of the magic of The Lion, the Witch, and the Wardrobe is not knowing how the magic works. This book, on the other hand, explains how the magic works. (Also, for all that “magician” is in the title, this book has never felt quite as magical to me as the first book.) So the ending of this book, while fun to read at the end of the series, is not at all appropriate for reading at the beginning of the series before you really get introduced to Narnia.

Don’t get me wrong. I still love the books, if not as much as I once did. And the narration on this one is a lot of fun. (My only real complaint with the narration is that there are some volume fluctuations when Branagh does different character voices, and those can be jarring.) These books are still worth reading, and I’m sure I’ll continue to re-read them once every so often, for the nostalgia factor if nothing else. They just aren’t as central to my self-image as they were. And that makes sense too. Even though all of the books have at least one girl main character in them, there are very few adult women role models. (Aunt Lettie in this book was a decent choice, though she gets very little screen time. Queen Helen, on the other hand, just smiles and looks pretty. I don’t think she says more than a single sentence in the whole book.)

Joy in reading and life

life with a chronic disease and a really big yarn stash

Finding the story that is waiting for you.

Sharing my love of books and food!

the ramblings, rantings and ravings of a book unicorn

Knit One, Spin Too

welcome to the virtual library

Traveling through books one page at a time.

Perspective of a Writer

From a Storytelling Fangirl